Statistics published by the National Water Safety Forum showed that across the UK in 2017, there were 255 people who lost their lives in accidental drownings. Many of these accidents could have been avoided with adequate precautions and safety measures.

As it is National Drowning Prevention Week (15-25th June 2018), we are reminded how important it is to educate children and adults of the dangers of water, as well as highlighting the need for drowning prevention initiatives.

To lower the number of drownings, signs can be used to inform people of the dangers present in and around the water they are interacting with. These dangers can include very cold temperatures, hidden currents, pollution and the inability to judge depth, as well as informing what the emergency procedures are.

Because water hazards are not just confined to the beaches and coastline, our range includes a variety of signs that can be used many environments such as swimming pools, beaches, quarries, rivers, reservoirs and lakes. We can also create bespoke signs to ensure you can communicate exactly what you need to safe-guard everyone on your site.

This has been a fabulous week for everyone at The Stocksigns Group. On Tuesday 20th June, our Managing Director, Danny Adamson, attended the Royal Society for the Prevention of Accidents (RoSPA) Gala Award Dinner to present a cheque for over £10,000, as part of our fundraising efforts for the charities Brighter Beginnings Campaign.

As the official signage partner of RoSPA, Stocksigns have been supporting the charity for almost a decade and since the beginning of the year, we have been fundraising for the Mount Toubkal Trek which took place in May. The trip saw an intrepid team of 12 climb to the summit of North Africa’s highest mountain. What, from the warmth of a Surrey office, seemed a daunting prospect really was a test of both endurance and physical strength with the team tackling freezing temperatures and sheer drops on their route to the top.

We were thrilled with the support we received from so many of our suppliers, family and friends, all of whom contributed so generously. 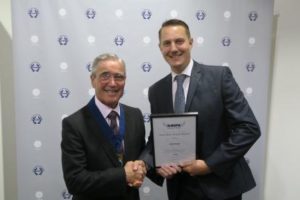 The fundraising efforts of David Cload, Projects and Survey Manager, who arranged and led the trip were also recognised when he received the prestigious RoSPA Guardian Angel Award at the dinner hosted as part of this year’s Safety and Health Expo 2018.

Our loyal customers also contributed to this fantastic total, which included donations made as part of our New Year sales promotion.

On behalf of all the team at Stocksigns, we would like to say a huge thank you to everyone involved in helping reach such a fantastic amount for a worthy cause.

To find out more about the work of RoSPA and the Brighter Beginnings Campaign, please visit their website www.rospa.co.uk.