The British Postal Museum and Archive take an active role in preserving our British Heritage. One such project was the restoration of a now rare blue airmail pillar box from the 1930s, including the recreation of heritage signs.

Special post boxes for the collection of airmail were on British streets for less than nine years yet they continue to fascinate. Originally intended to be placed in prominent positions in London, by 1936, there were 139 in London and 174 in the provinces. Much of the interest in these boxes comes from the colour that they were painted: blue.

Stocksigns, based at Redhill were engaged for the work of replicating the airmail signs. Founded in 1955, the company had purchased Burnham Signs (founded 1877) who, in turn, incorporated Garnier & Co. (established 1891). Garnier had been the original supplier of the small airmail signs to the Post Office in the 1930s. This commissioning was an attempt to preserve some continuity of provenance in the restoration.

Stocksigns was tasked with re-creating the oval and enamel airmail sign. As the originals were in quite poor condition, it was decided to conserve these in as original condition as possible and commission replicas to be fixed to the restored box. Restoration of the signs would have removed much that is original, and it is highly unlikely that more than a handful of original examples survive today. Such a curatorial decision permits the original signs to be available for research in their original and preserved condition.

To read more about this restoration project visit the British Postal Museum & Archive for the full story.

Posted by Daniella on 26th November 2012

October 2012 saw the official opening of the newly redesigned Jubilee Gardens by HM The Queen.

Stocksigns is an established signage manufacturer serving the entire UK’s sign market but specialising in various niche areas where they have grown to be the leading sign experts.

Adriaan Wijsveld is Stocksigns’ specialist in parks and open spaces. He has completed many successful projects for councils and municipal gardens etc. His design background, coupled with his in-depth knowledge of the signage market enables him to work closely with his clients, not only to successfully manage large scale projects but also take on many of the design aspects of creating new products.

Adriaan was approached by The Small Back Room design agency, Waterloo, which was aware of Stocksigns’ expertise in Vitreous Enamel sign manufacture. They wanted Stocksigns to partner with them in a project to rejuvenate Jubilee Gardens in time for the 2012 celebrations.

The products included in the project were:

Posted by Daniella on 6th September 2010

London is a great city for walking. The Mayor’s vision is to make it one of the world’s most walking friendly cities by 2015. Walking is an enjoyable, free and accessible activity and for most people, a necessary part of their everyday journeys.

Legible London is a wayfinding project designed to improve the navigation throughout the Capital for people who want to walk. A study conducted on behalf of Transport for London found that the present multitude of standard signs in central London are ineffective and often confusing, and that there was a consequent over-reliance on the Tube map to help people navigate above ground. External directories and wayfinding sign systems can simplify the journey around unfamiliar grounds. END_OF_DOCUMENT_TOKEN_TO_BE_REPLACED

Posted by Daniella on 1st September 2010

You don’t need to be a Marketing Guru to know that advertising helps promote a business and is vital to success. There are many ways to advertise and signs are one way of the most cost-effective and visual ways to do so. There are many forms of signs each with their own roles to play within a business. Signs can be divided into four main groups: corporate signage, way finding, information signs and safety signs. Part 1 of this guide will concentrate on how to get the best from your Corporate Signage. END_OF_DOCUMENT_TOKEN_TO_BE_REPLACED 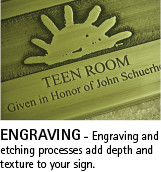 We have now created a library of many of our signs including this lovely example of an engraved sign.

Stocksigns for all your signage needs

Due to popular demand we have made some of our Vitreous Enamel Sign Pictures available to view. Enthusiasts and collectors from all round the world ask us for images of these iconic signs. Made from exceptionally hard-wearing Vitreous Enamel these signs have stood the test of time and look good as new for 40 years plus!